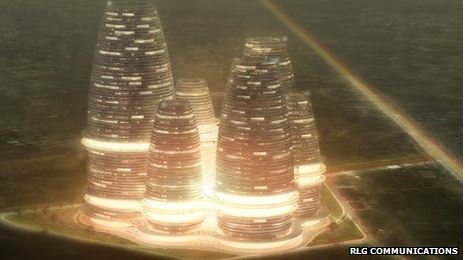 Ghana has started construction of a world class 10 billion-dollar information communication technologies (ICT) city project aimed at bringing all players under one roof within three years.

The six towers’ project, known as the “City of Hope”, will have Africa’s tallest building at a height of 270 meters.

A locally owned technology giant, Rlg Communications, is constructing the project, which will house over 25,000 people and create over 50,000 jobs when complete.

City of Hope is being built at the Kasoa a suburb of Accra.

Speaking at the launch President John Dramani Mahama said it was time the private sector spearheaded job creation in Ghana.

He pledged government support to the private sector, including Rlg to take advantage of private-public partnerships to create more jobs.

Tetteh Quarshie is credited with the introduction of one of the country’s major export crops, cocoa, over a century ago.

“While bringing modernity and excellence into the design of the City of Hope, all efforts have been made in incorporating the Ghanaian ingenuity and culture in the architecture as its inspiration,” he said.

He said the company wanted to creating an indigenous telecommunication operator in the voice and data industry and appealed to government to lend the necessary support.

Rlg recently signed a partnership agreement with Microsoft to make the US firm windows applications affordable in West Africa.

His company has also signed an agreement with Guma group of companies in South Africa for a partnership to develop products for Africa using cutting edge technological advancements.

The company has offices in China, Nigeria and The Gambia.